The wonderfull city of Chania

The city of Chania and capital of the prefecture stands out for her charm and nobility. It is separated in old and new town. The so-called new town, is a modern urban center, with all the amenities of any big city. Nevertheless the experienced eye of a traveler

distinguishes elements of her old nobility. As one walks through the picturesque streets of the old town and observes the architecture building of settlements understands the footsteps of the cultures that marked the country’s history and the culture of people.

A stroll in Chania looks like a fairytale. In every corner of the road your appointment with history renews and in every turn a “hero” waits for you and invites you to go on… The old town of Chania is built around the hill of Kasteli and on the ruins of Minoan Kydonia. The city is surrounded by historic neighborhoods where people of different nationalities, culture and religion lived.

The monuments that they left, gave Chania a special character. In Topanas district, which is located in the northern part of the town the wealthy Greeks were inhabited in the years of Turkish occupation. When someone walks on the cobbled streets can see old venetian mansions but also Turkish houses. The FortFirkas is also there; on the streets of the neighborhood you will find shops with traditional hand-made textile and species of folk art. Another interesting neighborhood is the Jewish Quarter. The Synagogue lies there, the church of San Francesco and the Archeological museum of the town. After that is the Fountain district, which owes her name to the fountain that Turks had made at that location. The Mosque of Hassan Pasha,which is saved in the district, is characteristic, while on the opposite side there is the Venetian Lighthouse. On the east side of the port the Kasteli district is located. The citadel of ancient Kydonia was there.

The archaeological findings show that this region is constantly inhabited from the Minoan period. Near to Kasteli, Splantzia district is located, which was a turkish neighborhood. There, the church of St. Nicholasand the byzantine church of St. Rokkos are located. Outside the walls of the old town, on the east side we meet the historic district Koum – Kapi. There, in the 18th century Bedouin workers had settled who also built a small village we could say. Today this region is one of the haunts of youth. In Halepa district you will meet some of the most important monuments of the local modern history, such as the house that Eleftherios Venizelos lived and the palace of Prince George.

The city of Chania is very interesting. For the browsing through her many monuments but also for the choices of entertainment and activities that offers. Theatre, cinema, bars, clubs with live music, whatever you wish you will find it in the city of Chania. 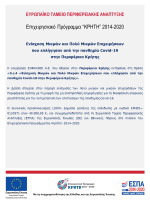